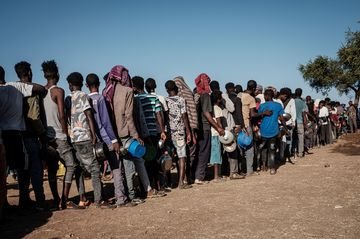 As many as 20,000 refugees are missing after two camps in Ethiopia’s war-torn Tigray region were smashed, the United Nations said.

The refugees, most of whom are from neighboring Eritrea, fled from the Hitsats and Shimelba shelters which were destroyed in fighting that erupted in Tigray in November. In January, satellite images showed the destruction of two refugee camps sheltering thousands of Eritreans in the region.

About 3,000 people made it to another camp in Mai-Aini, which the United Nations has access to, according to Filippo Grandi, the UN’s High Commissioner for Refugees. Many refugees “were caught in crossfire, abducted and forced to return to Eritrea under duress by Eritrean forces,” Grandi said, citing testimony presented to him at a visit to the camp while on a four-day trip for meetings with officials in Ethiopia.

Ethiopian federal troops entered Tigray in response to an alleged attack on Nov. 4 and toppled a dissident ruling party that’s set itself in opposition to Prime Minister Abiy Ahmed since he came to power in April 2018. Though the government announced victory on Nov. 28, the region’s leader has vowed to continue with the conflict that has displaced hundreds of thousands, killed thousands and threatened to destabilize the Horn of Africa.