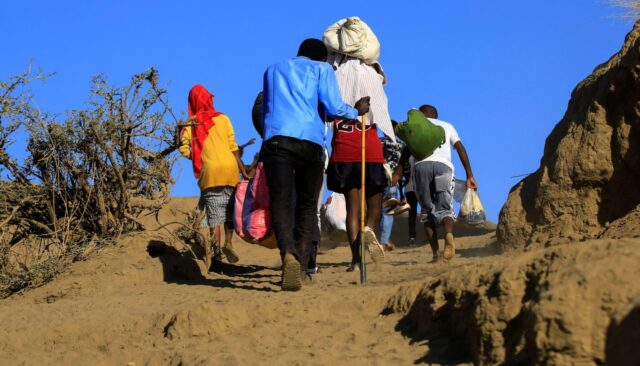 Undisputed evidence of Eritrean military involvement in the conflict in Tigray region of Ethiopia between the federal government and the Tigray People’s Liberation Front (TPLF) is hard to come by, but some claim there is evidence showing the involvement of Eritrea in the war.

While the governments of both Ethiopia and Eritrea have denied such claims, and the UN Secretary General has echoed that view, the US State Department regards the claims as credible.

The idea of Eritrean troops waging war in Tigray is condemned as reckless endangerment of civilian lives by Western diplomats, and as a travesty of Ethiopian sovereignty by Prime Minister Abiy Ahmed’s domestic detractors. But from the point of view of Ethiopia, Eritrea’s involvement could be best understood as a tragic but explainable option given the grave alternatives.

Appreciating the stakes at the start of the conflict in early November is crucial. Following a swift and coordinated attack against federal army positions in Tigray region on November 3, the TPLF instantly became a formidable military force taking possession of more than half of the country’s military equipment.

READ MORE Can Ethiopia heal after the TPLF killings? ‘We cannot bury everyone’ says ENDF

The scenario of a heavily-armed 250,000-strong regional rebel army marching towards the capital presented the Federal government a stark choice between capitulating, launching a prolonged pushback, or, in the best case, negotiating a settlement in which the TPLF would have a position of military and territorial advantage. All three scenarios would lead to nationwide security and political crisis, with potential for collapse of the central government.

In the first case, the return of the TPLF to national power, whether by fait accompli as the federal forces capitulate or by agreed compromise, would not be accepted by other regional states, most notably the Amhara, Oromia, and Somali regions. Leaderships there have been outspoken in their opposition to the TPLF.

In the second scenario, prolonged fighting carried on between the central government and Tigray forces, likely expanding into the centre of the country and involving several regional and paramilitary forces. This was the most catastrophic scenario, particularly because most regions have built up massive special armed forces.

The more likely scenario seemed a protracted and all-encompassing civil war, creating, at best, a stalemate paralyzing the Ethiopian government. At worst, this created the danger of a full state collapse destabilizing the Horn of Africa.

External Eritrean support might have averted this by tipping the scales in favour of the Federal government of Ethiopia. The TPLF’s leadership seems to have feared precisely this likelihood. The group’s leadership have sought to alert the world about, and politically pre-empt, the potential involvement of Eritrea in a war they said was imminent.

A key argument heard in opposition to Eritrean involvement is that a country with a repressive internal record should not be allowed military involvement in another country. But this argument misses the mark – the Tigray war is about restoring order, not democracy.

It would be ideal if only those with impeccable reputations could be involved in helping others. But historically, all types of regimes have participated in wars to restore political order around the world. The former Tplf-led government of Ethiopia itself participated in multilateral military and peacekeeping missions abroad, while remaining fiercely repressive internally. The deeply authoritarian Chad and Egypt are among the top troop contributors for peacekeeping in Africa.

READ MORE Is Ethiopia coming together or falling apart?

The Tigray war is about the survival of the central government of Ethiopia, hence the maintenance of basic political order. This does not guarantee the justice or liberty which the populations on either side of the warring parties want, but it is a basic prerequisite for those aims. The preservation of political order is not a democratic endeavour, but one of statehood – and, as such, it is not the exclusive turf of democratic states.

This is a dilemma which no national leader would want to confront.

In that sense, if indeed Eritrean support had shifted the outcome of the conflict, that is a gain in terms of political order, not only in Ethiopia but the entire Horn of Africa.

Eritrea’s involvement in the war, on the other hand, would certainly be followed by darker legacies. The possibility of atrocities being committed against the Tigrayan population, and the vulnerability of Eritrean refugees in Tigray are grave consequences that could overshadow the gains of restoring political order, or even sow the seeds of threat to political order itself.

The stark choice that presented itself, it seems, was one between averting the collapse of the central government of Ethiopia and ensuring that only clean hands would do the job. This is a dilemma which no national leader would want to confront. It is an eventuality that the TPLF leadership could have easily foreseen when kick-starting the conflict. They likely dismissed it as less probable, or accepted it as a cost of maintaining their power.

In the future, one pathway to resolve this dilemma and reduce the negative role of external players would be to establish at a regional level a mechanism where countries faced with the imminent threat of governmental collapse could seek and rapidly mobilise a multilateral force with a clear mandate and oversight. This would help reduce scenarios where governments in crisis would be trapped between keeping an appearance of self-sufficiency and seeking outside help under the cover of darkness.