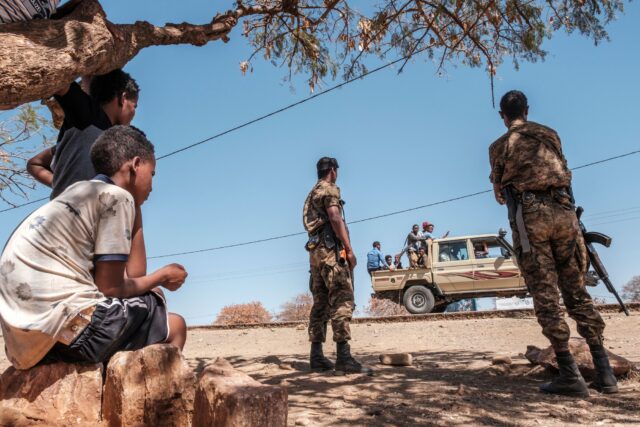 The European Union accused Eritrean troops of fueling the months-long conflict in Ethiopia’s Tigray region and echoed a U.S. call for their withdrawal.

The U.S. said last month there were “credible reports” of Eritrean involvement in the war in Tigray, which began on Nov. 4 when Ethiopian federal troops declared war on forces loyal to the dissident Tigray People’s Liberation Front. The governments of both Ethiopia and Eritrea have previously denied Eritrean troops are involved in the fighting.

Finnish Foreign Minister Pekka Haavisto, who has been nominated as a special envoy to the region by EU member states, is scheduled to meet Abiy on Tuesday in the Ethiopian capital, Addis Ababa, to discuss the crisis.

Aid Suspended
In December, the European Union suspended almost 90 million euros ($109 million) of budgetary aid to Ethiopia because of the conflict, which the United Nations estimates has killed thousands of people, displaced about 2.2 million others and destroyed 80% of the region’s health centers.

The war threatens to strain government finances already stretched by the Covid-19 pandemic. Last month, the Finance Ministry said it would seek to restructure its external debt under a Group of 20 program to address “pandemic-related financial constraints.” The nation’s $1 billion of 2024 Eurobonds plunged the most on record after the announcement.

The latest in global politics
Get insight from reporters around the world in the Balance of Power newsletter.
Email
Enter your email
Bloomberg may send me offers and promotions.
Sign Up
By submitting my information, I agree to the Privacy Policy and Terms of Service.
Haavisto on Feb. 7 traveled to Sudan, where he held talks with government officials aimed at cooling tensions with Ethiopia after several deadly clashes between the two nations in Al-Fashqa, an area of fertile farming land that straddles their border. Officials in Ethiopia’s ethnic Amhara region have pressed the government to seize land that Sudan claims ownership of based on colonial treaties dating back to 1902.

UN agencies on Monday received approval from the government for 25 of its international staff to move into Tigray to help deliver humanitarian aid to the region, Secretary-General Antonio Guterres’ spokesman, Stephane Dujarric, said in a statement.

“We remain deeply concerned about the significant escalation in humanitarian needs in Tigray where people have endured more than three months of conflict with extremely limited assistance,” Dujarric said. “We are also very concerned by reports of grave violations against civilians that we continue to receive.”

Though Ethiopia announced victory in the Tigray war on Nov. 28, the region’s former leader, Debretsion Gebremichael, has vowed to continue fighting.

In Pictures: Eritrean refugees caught in crossfire in Ethiopia