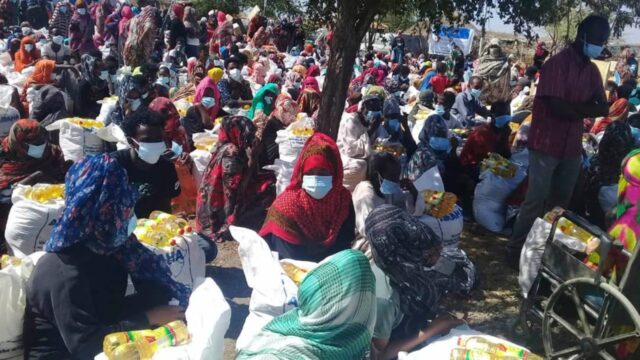 The Eri Yiakl Foundation, originally formed to help Eritrean refugees during the pandemic, now finds itself responding to conflict in Ethiopia – and finding new ways to meet needs. Direct Relief is supporting the Eri Yiakl Foundation’s work on the ground in Sudan with a $250,000 emergency grant and $60,000 worth of PPE.

Dr. Habteab Feseha, an Eritrean-American physician based in Arizona, said he’d never dreamed that he’d be organizing aid to a conflict zone.

For years, he’d watched fellow Eritreans escaping military service, economic hardship, or persecution settle in other countries, including Ethiopia, Sudan, Egypt, Libya, and Yemen. (Feseha’s organization, the Eri Yiakl Foundation, estimates that there are more than 260,000 Eritrean refugees in those countries.)

Then Covid-19 hit, and Feseha, along with a number of other members of the Eritrean diaspora, was concerned about the displaced Eritreans clustered together in camps – where sanitation would be less than dependable, social distancing impossible, and personal protective equipment hard to come by.

“We cannot just sit idle, is how the idea came about,” he recalled. “We need to ask every Eritrean from every corner of the world…to contribute whatever they can.”

Originally formed in April of 2020, the group’s goal was to prevent the pandemic’s spread in the camps by providing education, PPE, hygiene supplies, and medical aid, as well as training and equipping clinic and other health workers.

But things changed quickly. In November of 2020, civil war erupted between the federal government of Ethiopia and the ruling party of the Tigray region – where approximately 96,000 Eritreans had sought refuge.

“We never thought that, at least in Ethiopia, there would be such infighting. We thought the refugees were safe in Ethiopia,” Feseha said.

Because communications in the region were shut down, it has been difficult to understand exactly what is happening in the Tigray region, Feseha explained. “We don’t have a clear picture,” he said.

Some reports have come out from refugees able to call family members and news outlets, but much still isn’t known about the situation. Although the fighting was officially declared over on November 28, Feseha said guerilla warfare is still ongoing.

However, one thing was clear: Tens of thousands of people – with both Ethiopians and Eritreans among them – were fleeing the region. More than 50,000 of them have made their way to Sudan, where another conflict, between Ethiopia and Sudan, was also taking place.

It was in Sudan, the members of the Eri Yiakl Foundation decided, that they would concentrate their efforts.

“People are crossing into Sudan after traveling on their feet for three, four, five days. They’re hungry and they’re most likely going to have some issues,” Feseha said.

The group currently has two goals. The first is to prevent Covid-19 among the primarily Ethiopian refugees arriving in Sudan by dispensing PPE, sanitary supplies, and information.

“Our plan now is community mobilization: teaching handwashing, social distancing, avoiding crowded areas,” said Dr. Tadesse Tewolde, who is working for Eri Yiakl on the round in Sudan.

The second is to provide primary care through a team, headed by Tewolde, working at the Tenedba camp in Mafaza, Sudan. Tewolde said he anticipates that people in the camp will number about 20,000.

He’s also highly concerned about reports that Covid-19 has made its way to the camp. Containment and education will be a high priority.

This undertaking has come with a number of challenges. A troubling lack of information from inside Ethiopia.

Difficulties establishing a presence as an NGO in Sudan – eventually, Eri Yiakl worked with a local group, the United Peace Organization, to facilitate their on-the-ground work.

Direct Relief is supporting the Eri Yiakl Foundation’s work on the ground in Sudan with a $250,000 emergency grant, following an earlier $60,000 purchase of PPE to support the organization’s work.

When Eri Yiakl began, “‘it’s going to be a maximum of three months, and Covid is going to be gone by then,’” Feseha remembered thinking. “Once we started, we started to see that the problem is much, much bigger than we ever imagined…it’s been almost a year and we have done a lot of good things we’re proud of.”

Although most of the refugees entering Sudan are Ethiopian, not Eritrean – and the two countries do not have a friendly history – Feseha said Eri Yiakl is determined to help.

“These were the people who were feeding, sheltering, and transporting” Eritreans, he said. “Now unfortunately they have become refugees themselves, and we have to help them…They are our brothers, and they are like us.”

The United States is demanding an Eritrean retreat in Ethiopia