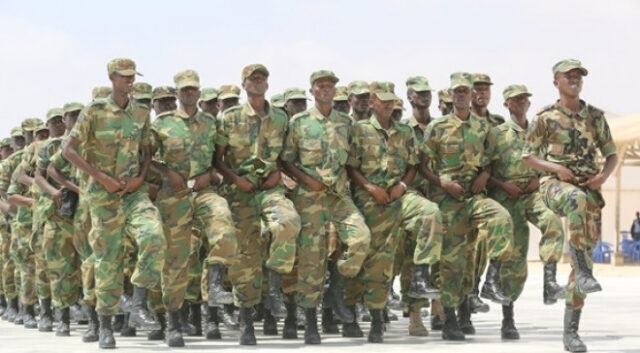 MOGADISHU, Somalia – The National Intelligence Security Agency [NISA] was actively involved in the recruitment of soldiers who were deployed to Eritrea for further training, the Investigative Dossier has revealed, in what could set records straight following the government non-commitment to respond to queries raised by a section of relatives to the soldiers.

Besides the NISA agents, at least 135 influential elders took part in the exercise and in collaboration with some Members of Parliament, bringing onboard hundreds of youths. The Gen Shirbow camp behind NISA headquarters in Mogadishu was used as a registration site, the Dossier established.

Preliminary reports indicate that the federal government trusted NISA with the exercise due to immense resources invested in the department, besides the fact that one of the officers has close ties in Asmara, the final destination of the recruits. The officer’s name was not revealed.

The first batch of cadets, the Investigative Dossier revealed, was airlifted on Aug 19, 2019, while the second group was airlifted on Oct 20, 2019. Flights continued airlift cadets regularly until COVID disrupted in March 2020 when Somalia suspended all flights due to the pandemic

As a large number of recruits were registered during the first months of the pandemic, the Investigative Dossier adds, the Ministry of Security received 3,500 rapid COVID tests; flights ferrying cadets resumed. Two sources estimate 5000 to 7,000 cadets currently in Eritrea but a third source gave a lower figure.

In January, there were reports that some of the cadets training in Eritrea participated in the Tigray war which pitted the Ethiopian National Defense Forces [ENDF] and the Tigray People’s Liberation Front [TPLF]. Multiple sources had claimed that close to 300 Somali soldiers were killed.

A few weeks ago, the Dossier adds, the government started to allow cadets to call their parents following reports on their whereabouts. However, the Investigative Dossier found out that they have to leave their camps to make the call, and this doesn’t come too often and is not available to every cadet.

During the intensive training in Eritrea, reports indicate, at least one cadet died according to one of the parents who was contacted by NISA. One other parent mentioned an “incident” in their camp without giving specific details but one parent also said he was told his son died which turned out false because they spoke in January.

The idea that Eritrea trains Somali soldiers was first raised by outgoing President Mohamed Farmaajo in his second visit to Asmara but was discussed in detail during President Isaias Afwerki’s visit to Mogadishu in December 2018.

The initial plan was to train the soldiers at home; Eritrea sent military experts to assess the situation; they visited Degaanley, Isaley, Jazeera, MoD, and met different officials but eventually, they decided training in Somalia could compromise the safety of trainers and cadets themselves

According to some cadets, they finished training; some have months of training left but it’s unclear when they will be returned. However, some reports indicate that the Somali National Army [SNA] has started plans to accommodate over 5,000 soldiers in the coming months.

”Well done Harun Maruf for exposing the covert Somali paramilitary training in Eritrea. Very intriguing how the Somali government defied all the laws of the land. Ministry of defense was kept on the dark for the approximately seven thousand recruits sent to Eritrea,” observed Abdirizak Mohamed, a federal MP.

Somalia is set to start handling its own security protocols once the Somali Transition Plan is fully implemented by the end of 2021. At least 20,000 troops from among AMISOM contributing nations are set to leave the country after several years of a peacekeeping mission.